Commentary:
Will keep it short. I did only one trade, adding my position in Sheng Siong Group as the price floated lower. September also witnessed the birth of CapitaLand Investment Management, which was rated a 'Buy' by several brokerages, leading to its price shooting higher over the past week. SATS also received a positive boost, as the United States laid out its plan to relax border restrictions for vaccinated travellers [news].

Heading into October, I see little stimulus for stock prices to continue its climb. I'm keeping hope that we are due for a price correction soon, so that suitable buying opportunities will appear. We shall see.

Commentary:
Another month of discipline for me. I did not pull the trigger on any stock in my list. From the recent price movement, the local market seemed to have hit a peak. The Straits Times Index is down 3.5 percent for August, even though the SPX 500 Index is up 2.9 percent for the corresponding period. Of course I could be wrong - the bulls may decide to stage a comeback. Nonetheless, I am sitting pat on my cash for now. My warchest is building up comfortably, and I will deploy it at an opportune time.

Street talk for August - Yokohama has elected a mayor whom is against the building of a casino. So the hope for Genting Singapore to win the gambling license is as good as gone. ComfortDelGro on the other hand, secured a S$1.13 billion joint venture deal to operate rail services in Auckland. The transport conglomerate is also looking to list its Australian subsidiary. In-flight caterer SATS has gotten a boost, as Singapore opens up to welcome visitors from Germany and Brunei with quarantine-free travel. Finally, shareholders of CapitaLand has voted overwhelmingly to privatize its property development business, and transit into a fund management model. We shall see the birth of CapitaLand Investment (CLI) in September.

At home, my spouse had broached the topic about refunding our CPF account, which we had used to pay for our housing loan. After careful consideration, I decided not to go ahead with my portion. There is no additional benefit, other than 'owing' myself less CPF interest. Moreover, I need to set my funds aside for my kids' endowment policy premiums, SRS account top-up as well as CPF Retirement Sum top-up due at the end of the year.

Singtel - Caught between a rock and a hard place

Singtel looks to be caught between a rock and a hard place. One of its associates Bharti Airtel intends to raise up to Rs 21,000 crore through a rights issue to bolster its balance sheet [news].

A Bloomberg Intelligence analyst estimates Singtel may need to cough up S$1.2 billion to avoid dilution of its 31.7% stake in Bharti.

As we know, Singtel is in the midst of rolling out its own 5G infrastructure in Singapore, and it costs a bomb. We also know Singtel's subsidiary Optus is trying to offload its towers to raise capital. But I fear this may not be sufficient, which implies Singtel may have to risk cutting its dividend to conserve cash.

It certainly doesn't bode well to equity investors like me. We shall see in due time what Singtel management has to say about this matter.

Email ThisBlogThis!Share to TwitterShare to FacebookShare to Pinterest
Labels: Singtel 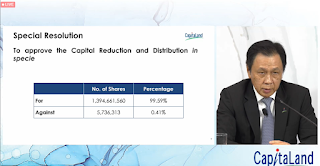 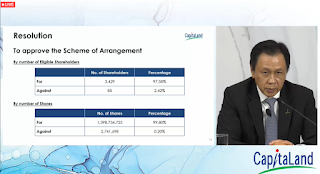 No surprise here, since the market has anticipated investors to vote in favour of transiting CapitaLand to CapitaLand Investment (CLI).  So far, the market has been receptive of the transition, as inferred from the rise in CapitaLand's stock price post-announcement.

Have a read of the document if you are keen to find out the answer.

Email ThisBlogThis!Share to TwitterShare to FacebookShare to Pinterest
Labels: CapitaLand

Commentary:
I did not make any trade for the month of July. The stock prices stayed higher than my ideal entry range. Thus, I saved up my excess cash as dry powder.

The market cheered the lifting of dividend cap on local banks by MAS [news]. Analysts expect the three banks to increase the dividend payout on the next earning release [news]. With the tapering of the Jobs Support Scheme (JSS) while COVID-19 is still ravaging globally, some firms in tourism-sensitive industries like SATS will face a more arduous journey ahead. In its 1Q FY22 business update, the airline caterer reported its PATMI would have been a loss of S$35.6m if not for government reliefs [announcement].

Medical group HC Surgical Specialists reported improvement in its result, with full year profit almost double y-o-y [announcement]. The company bumped up its dividend from 0.7 cents a share to 2.3 cents a share. I also had a pleasant surprise from rubber chemical maker China Sunsine Chemicals, which issued a positive profit guidance (read: substantial increase in net profit) ahead of its earning release on 13 Aug [announcement].

August will be a busy month to watch, as most local big caps report their results for the first half of the calendar year. Among those on my list include OCBC (4 Aug), DBS (5 Aug), SGX (5 Aug), ST Engineering (12 Aug), Genting Singapore (12 Aug), CapitaLand (13 Aug) and ComfortDelGro (13 Aug).

Commentary:
The local market has been trading in a range for the month of June. However, this is still higher than my preferred entry level, hence I did not execute many trades. I did add more Sheng Siong shares to my CDP portfolio when the price retreated from the spike last month. There is a jubilant mood among investors as the economy recovers. Many believe interest rates will remain low till next year, despite 'transient' signs of inflation.

It has been eighteen months since the COVID-19 coronavirus first struck. How things have changed. I have been working from home for more than a year. My grocery shopping is now done in the wee hours of the morning, so as to avoid crowds. And my kids are getting competent in navigating the Internet, doing Google searches, attending Zoom meetings and submitting scanned written homework online. While I miss traveling, I have used my free time to pick up Bahasa Melayu and watch video documentaries.

How has life changed for you?

Portfolio Summary for May 2021

Commentary:
Another month has passed in the blink of an eye. The selldown in May did not materialise to a big extent, which was admittedly disappointing due to a dearth of suitable buying opportunities. Market was rangebound, with no impetus to climb or decline. Talk of the town has been around the volatility in Bitcoin price, and whether the U.S. Fed will be forced to raise rates to counter inflation. (At the moment, it looks to be no.)

A few conglomerates reported their fiscal results in May. Of particular note was SATS, which would have reported a heavy loss if not for government support. The board had opted to omit the final dividend, which (to me) was a prudent move. The company should not needlessly compromise its current cash-rich position. It is anybody's guess how long the COVID-19 pandemic will last.

SingTel booked an exceptional charge of S$1.18 billion to write down its struggling Amobee and Trustwave divisions, while its new CEO cited plans for a "strategic reset" to drive recovery and growth for the telco giant. Research analysts had dubbed this as a "kitchen-sinking exercise" and are generally optimistic on the future direction. I look forward to a successful execution of the new strategy.

The Hour Glass reported resilient fiscal results despite the pandemic. More pleasantly, the board declared a final dividend of 4 Singapore cents per share, which is double of the previous year. The stock price had soared as a result.

Nam Lee Pressed Metals reported a good set of results. 1H FY2021 revenue was up 63% YoY, gross profit was up 139% YoY. The stock price reacted positively to the news. However, as the company no longer fits into my investment mandate, I squared off my position with a tiny profit.

I also nibbled some Silverlake Axis shares for my SRS portfolio. The most recent result is still palatable, and as the company described in its 3Q FY2021 highlights, "the industry has come to realise that there is no quick end to the pandemic and they have started to budget and plan for an expansionary future". This bodes well for the company.

Stocks aside, it is depressing to see Singapore still mired in the pandemic with a string of unlinked community cases daily, despite the heightened measures. I can't help but ponder why Hong Kong, the European Union and the U.S. were not particularly hard hit by the same B1.617.2 variant. Is it ill luck of the draw, or have Singaporeans been too complacent and negligent in combating the spread of the virus?

It is my wish - which I am sure is everybody's - for Singapore to overcome this current wave of transmission. As the Prime Minister and Minister Lawrence Wong have indicated, COVID-19 may become endemic and impossible to get rid of completely. We will have to live with it. Swab and booster jab could be a fair routine in the new normal. 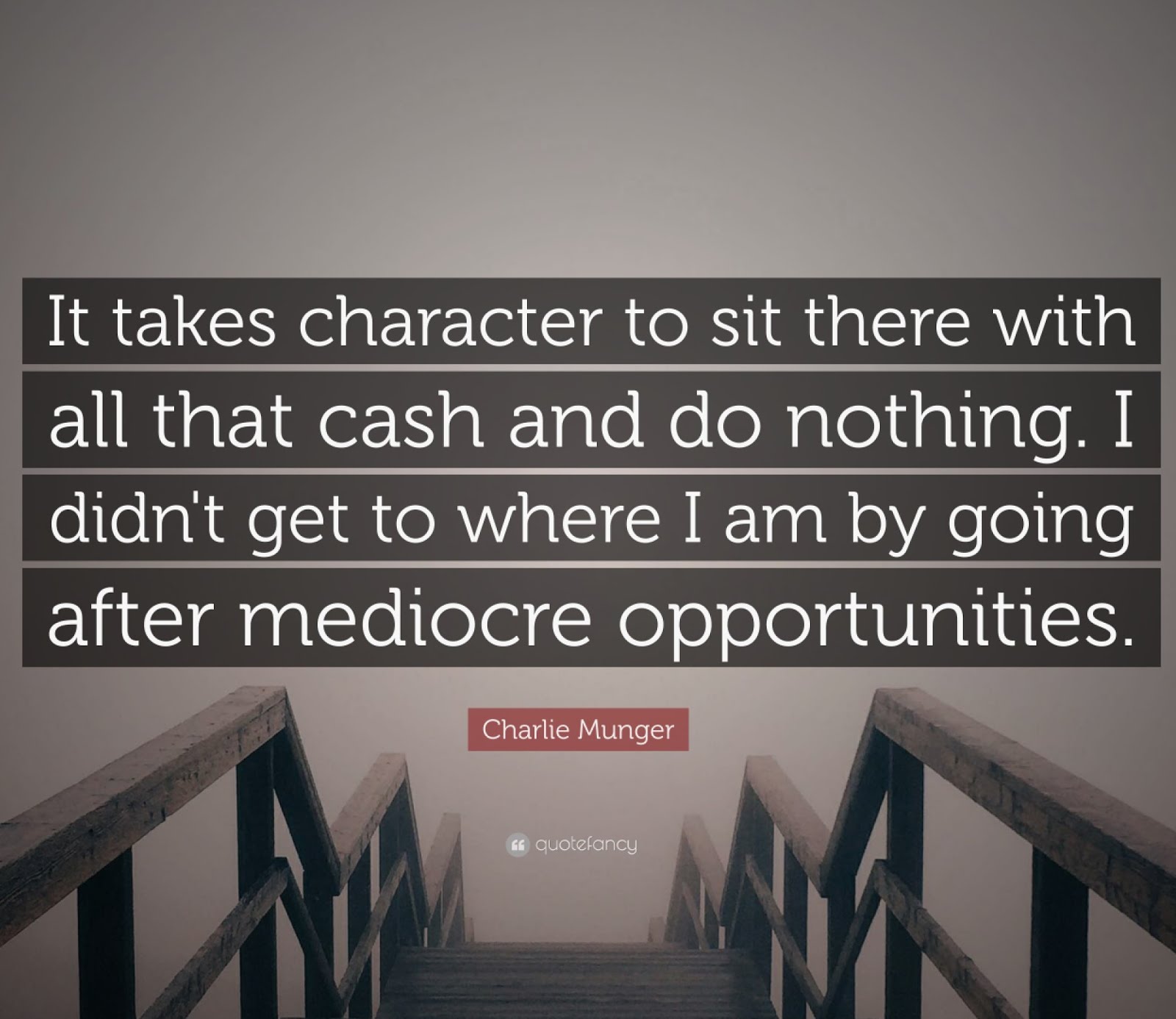 Blogs That I Read